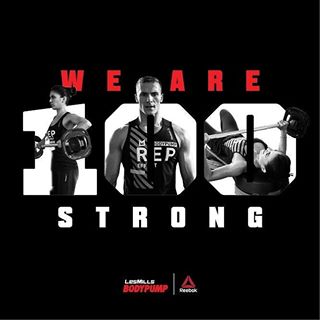 January 14, 2017 marks the global launch of BODYPUMP 100. That’s 25 Years of BODYPUMP. That’s nine years and four months since I attended my Les Mills BODYPUMP initial training module to become an instructor and nine years and six days since I got my first permanent BODYPUMP class.

In summer 2007 my colleagues and I joined the gym across the street from work together. We agreed we’d go workout together at lunch. It’s was Sports Clubs of Canada Bloor Park location. My colleagues were really kean on a yoga-pilates type class. So I went along with them. But another class had caught my eye. It was on before the class we went to. It looked fun but I wasn’t sure I’d able to do it. I’d never used a barbell before.  My fitness buddies were uninterested, so one day I decided to be brave and go try it, even if it meant going alone. So I went along. I watched the other set up their equipment, and copied them. I found a few people that I thought were probably about the same level as me so I grabbed the same weights they had. I was that participant who did not raise their hand when the instructor asked if anyone was new. And I really didn’t like that she then called me out and said she’d never seen me before and asked me, mic on & in front of everyone, if I was new. So naturally, I lied and said no. Fortunately that was the only negative moment of my experience. The rest was the most fun I’d had exercising in a long time. It was also a bit of an eye opener that I could barely bicep curl or shoulder press 1kg plates. At the time I joined, the chain had just been acquired by GoodLife Fitness, a huge chain in Canada and they brough Les Mills to the club. I was so excited about this new class I tried that I started going 2-3 times a week and then one day, a cover instructor came up to me after class and asked me if I was an instructor and then said my technique was very good. I laughed! Me, an instructor? The seed had been planted. It grew strong. It grew fast when I realised that as an instructor I could empower and inspire others to get fit and strong.

The following Tuesday I asked my step instructor “How did you become an instructor?” she said she was a class participant like me and had a career like me and fell in love with step and took the training.  Then she said, GoodLife are holding instructor auditions this week because they needs new instructors for all the clubs they acquired. She didn’t know any of the details but gave me a name of someone who might. Next thing I knew,  Sunday morning, I was at the audition.

I wasn’t alone. That studio was full and it has capacity of about 60. We each had to wear a number pinned on our back (maybe front too).  It was scary! All these people braging about how long they’ve been doing BODYPUMP while I’ve only been to classes for less than two months. What was I doing there? What was I thinking? Before I could change my mind, we were called in. It was called an audition, it was really a movement assessment. Two instructors delivered a class and we all participated while other instructors and group ex managers rated us based on how we moved. Could we follow the beat? Was our technique decent considering we were’t trained. In the interview they told us about how hard it is to learn choreography and how time consuming it is and how much it costs to buy the music ever quarter, etc. They were upfront about it and didn’t sugar coat any of it. They wanted to know who was willing to do all the work it takes to prepare to get in front of the class. Guess who got through? 🙂 I’d heard that less than 10 of us got through, but I’m not sure if that’s right. One month later, I signed up for my BODYPUMP initial training.

The rest is history and here are a few photos of my journey so far.